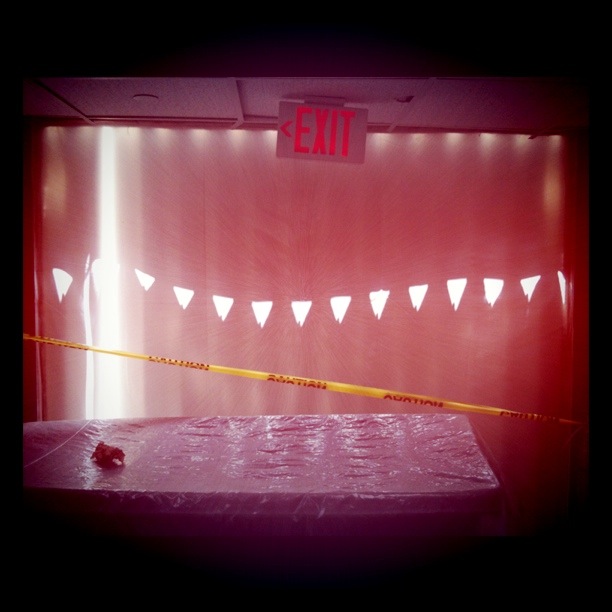 The sausage tree on lincoln road is blooming.
Posted by rjm at 8:14 PM No comments:

from the wit of the staircase So here I am, in the middle way, having had
twenty years -
Twenty years largely wasted, the years of
l'entre deux guerres -
Trying to use words, and every attempt
Is a wholly new start, and a different kind
of failure
Because one has only learnt to get the better
of words
For the thing one no longer has to say, or
the way in which
One is no longer disposed to say it. And so
each venture
Is a new beginning, a raid on the inarticulate,
With shabby equipment always deteriorating
In the general mess of imprecision of feeling,
Undisciplined squads of emotion. And what
there is to conquer
By strength and submission, has already
been discovered
Once or twice, or several times, by men whom
one cannot hope
To emulate - but there is no competition -
There is only the fight to recover
what has been lost
And found and lost again and again: and now,
under conditionsThat seem unpropitious. But perhaps neither
gain nor loss.
For us, there is only the trying. The rest is not
our business.
--T. S. Eliot
East Coker
Four Quartets
Posted by rjm at 12:50 PM No comments:

Email ThisBlogThis!Share to TwitterShare to FacebookShare to Pinterest
Labels: build and destroy, others' works The above link is to a video of Radiohead's Bulletproof. We saw them a few nights ago in West Palm Beach at the Cruzan Ampitheatre. It was an incredible show. Nothing short of amazing. There are already dozens of videos slash songs from that night posted on Youtube, for your (our) viewing enjoyment.
This picture was taken with my phone. It's of the stage moments before the show started.

Email ThisBlogThis!Share to TwitterShare to FacebookShare to Pinterest
Labels: music, others' works

y'all fixed her gallbladder, right?

From the acidic & animated comedy of Squidbillies,
its intro diddy:

"my dreams are all dead & buried
sometimes i wish the sun would just explode.
when god comes and calls me to his kingdom
i'll take all you sons a bitches when i go...."

Email ThisBlogThis!Share to TwitterShare to FacebookShare to Pinterest
Labels: others' works

this is nowhere too I've been thinking about the precise center of nowhere.
Posted by rjm at 5:15 PM No comments:

Email ThisBlogThis!Share to TwitterShare to FacebookShare to Pinterest
Labels: ideas I offer a non-sequitor to begin with (above):
A DC10 full of well-behaved, though understandably impatient, horses.

Second:Things I am taking in at the moment:

1) too much Vetiver,Sufjan Stevens, the new Of Montreal, Greg Ashley and/or GrisGris
2) Peter Doig, late 70s Chris Burden, plus Eva Hesse's formal compositions (among others things)
3) Just read Chuck Palhniuk's (sp) Survivor, and save for a few interesting chops here & there I thoroughly hated his writing. Deeply, horribly, terribly hated it. He tells & retells the same story over and over again from book to book.
4)watching on the telly anything to do with ghosts or UFOs (as usual)
5) Debating whether to read Flannery O'Conner or F.Scott Fitzgerald
6)Jerry Saltz's reviews
7) the games our cats play